If there is a unifying theme running through ‘Human Archaeology’ it is the relationship between Man and his history, memory, and how looking back at the past – at both its events and its artefacts – gives us the context for who we are. 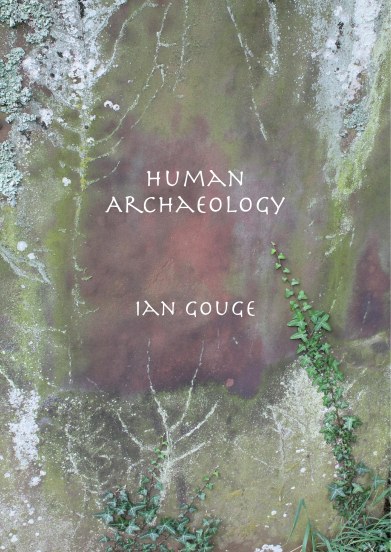 This reflection manifests itself in a number of ways. In poems such as “Ripples” or “Beyond the Boundary” we look back into history in a traditional, narrative way. Far from being idealised, however, experiences are never far from disappointment, especially when it comes to journeying – as in “The Grand Tour”, “Exploration”, or “Northwest Passage” – where we see reality jar with hope or expectation.

If such viewpoints might be regarded as ‘romantic’ then we shouldn’t be surprised as there is romance in this volume too. However, this is also often unsatisfying because the outcomes are not ones of fulfilment (“Rose”), or have only generated disappointment or confusion (“The Dissemblance of Rock”), or are decidedly un-romantic (“Standing in Doorways”, “Love-locked”).

That the two strands – history and romance – are linked also runs through many of the pieces, and nowhere more explicitly than in “Abstraction” which opens with “Romance is an overlay on reality”, and elsewhere is the assertion that what we view as ‘history’ is simply a romantic interpretation of the past: “a romantic myth born from a need to believe in something / and that what we have done matters” (“Mirage”). More significantly perhaps, is the notion that true history cannot be known: “True history resides in all the photographs / that were never taken, / beneath veneers never applied, / like a ghost silently pacing marble halls / sensed but unrecognised” (“Abstraction”).

Whether this undermines the thrust of the poems that focus on the fabric of history – perhaps most evident in the “Archaeology” poems themselves (I, II, III and IV) – is a moot point. Perhaps it serves only to highlight just how difficult and complex the relationship between us and our history actually is.

That real conflict is an ever-present in our past – and in personal lives – is echoed too in poems such as “Days of Tea and Backgammon”, “Reading the Runes”, and “War Artist”, and where there is such conflict there will always be a fight for justice and liberty. In some respects, the poet – whilst keeping a safe distance from much of the debate, acting primarily as overseer and interpreter – is as much a rebel as those who appear in pieces such as “The Revolutionary”, “Assassination” or “Uprising”. And perhaps sharing some of their ideals, in one or two instances – most noticeably “The Permanence of Shrapnel” and “Camouflage” – the author lets his guard down in an attempt, ultimately in vain, to locate himself within his own history.

“Human Archaeology” was published in July 2017 using the IngramSpark platform. It should be available to bookshops globally through their Ingram accounts, and hopefully soon on Amazon and other on-line outlets.